My Top 10 Vegan Eats in Paris 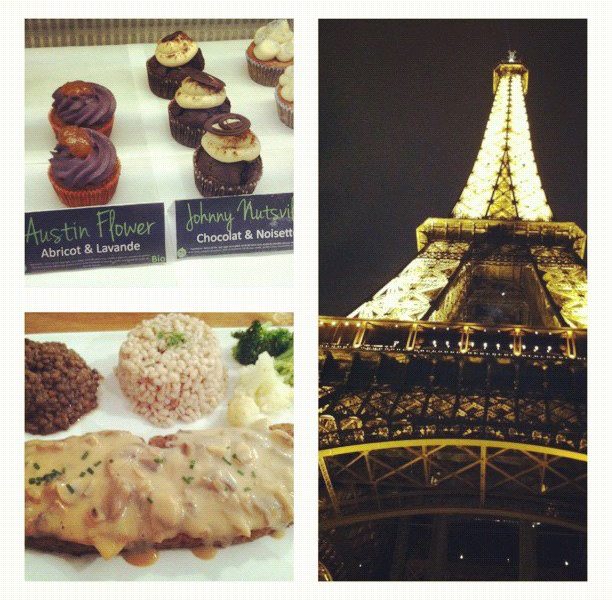 When I told people that my husband and I were traveling to Paris for vacation, their reaction after smiling was, “How are you going to eat vegan in Paris?” Everyone is under the assumption that Paris, the fromage capital, is not veg-friendly. Lucky for me, we were working on a travel feature on Paris at VegNews (you can find it in the September+October 2012 issue, along with our six amazing vegan cheese recipes!) and it was the perfect travel guide. And while you can’t just pop into any cafe and order a vegan dish, there are tons of great eats for a week’s worth of decadent delights. Here are my top 10 favorite vegan eats in Paris that were très bon!

A fantastic #vegan breakfast at @Gentle_Gourmet. Their pain de chocolat rocks. Crêpe was amazing too!

If heaven is a pastry, it’s the chocolate croissant at the all-vegan Gentle Gourmet. Go for breakfast when the flaky treat is warm and the chocolate inside is slightly melted. I highly recommend eating at The Gentle Gourmet Cafe. Excellent service, delicious dishes, and traditional French cooking with a vegan spin. If you want to drool over more Gentle Gourmet dishes, just look below.

I’ve eaten a lot of veggie burgers and MOB’s special sauce-covered patty is one of my all-time favorite that I’ve ever eaten. Seriously. Now, the photo above is my meals at MOB and Gentle Gourmet just so you can see how amazing both of them are—and in one photo it makes you realize that you can eat vegan in Paris.

MOB is a tiny little eatery, but big on flavor. The cafe has a sister restaurant in Brooklyn, NY that is much larger, but really don’t miss this when you’re in Paris!

On one of your first few days in Paris, head straight to Un Monde du Vegan and buy blocks of Vegusto, a European vegan cheese brand. They are hard and melty versions and they all taste like heaven. Other vegan goodies to stock up on: Italian  salami, chocolate-filled cookies, cheese slices, and vegan Nutella!

I love bread. I am a card-carrying carb lover. Parisians buy baguettes often and eat them while walking through the streets. Brendan and I joined the Parisians and picked up fresh loafs every day from a boulangerie, which are on nearly every street corner. You won’t find this kind of quality crust and soft interior anywhere else.

I think this photo pretty much says it all. Le Potager du Marais is entirely vegan and while small, it’s a great place to cozy up with this dessert and a hot chocolate.

In the photo for #2, you’ll see a little green salad surrounded by crisp, deep-fried Vegusto cheese balls. Yes, you read that right. I don’t even have the right words to express the joy of eating these warm, crunchy pieces of heaven. I’d rather save my breath for eating more of them.

A great day of cupcakes at Vegan Folies, crispy seitan with mushroom gravy, and the Effiel Tower. #paris

This tiny little bake shop, Vegan Folies, specializes in decadent, beautiful cupcakes with outrageous names like Austin Flower (Apricot and Lavendar) and Johnny Nutsville (chocolate and hazelnut). If there’s any cheesecake left, do yourself a favor and grab a slice.

The formula menu (aka prix fixe menu) at Saveurs Veget’halles is worth every penny. While this won’t be the fanciest meal you ever eat, it will be solidly scrumptious. I loved the crispness of the seitan (pictured above). Brendan ordered the mushroom loaf covered in a blackberry and ginger sauce that was really good. It’s not entirely vegan, but plenty of vegan options.

9. Falafel at any Lebanese stand

You’ll find a lot of Lebanese stands open late, which offer up freshly made falafel and charred aubergine (eggplant). Nothing beats warm pita bread and falafel!

This all-vegetarian burger joint just opened in October and it’s super cute. You’ll have to eat your burger sans formage but the friendly service and perfect fries make up for your cheeseless patty.

Believe it or not, there are even more vegan eats that we just didn’t get to go to during our week in Paris. (For more, pick up the September+October 2012 VegNews!)

← 5 Simple Tips for Networking as a Writer
Virtual YA Book Club: The Fault in Our Stars by John Green →

We had a beautiful day at @farmsanctuary, celebrating Valentine’s Day with some wonderful rescued farm animals. The gentleness of the animals matched with my daughters’ gentle touches. The last time I was here, I was pregnant with them. It’s amazing to see their love of animals grow since that first pre-visit four years ago. 💗
I went to my first #womenssoulcircle led by @leadwithangelaaguirre. It was truly transformative, hearing and sharing stories from a place of vulnerability, no judgement, and compassion. Thanks to @creestalina for nudging me to go. The power of women coming together is amazing. 🙌🏼
Tomorrow, we’re going to Chloe & Claire’s preschool to make dumplings 🥟 for the Lunar New Year 🧧. We made mushroom, tofu, and cabbage dumplings for dinner tonight. It’s their first time making dumplings and they turned out great. Dumplings represent good fortune. My little chefs are full of plenty of 🥟!
I’m thrilled to share that in the January 2020 issue of @real_simple, I have a feature story about helping children get along. It’s an idea that tugged at me when #MeToo came out and I wanted to bridge the gap so my children had ways to develop healthy friendships. I also got a chance to look at children’s literature that I felt reflected great friendships too. I’m proud of this piece and I hope it inspires conversations in families.
Chewie brought his favorite toy to sleep on three blankets that he arranged. #livinghisbestpuglife